In 1968, the St. Louis Catholic Church held a Bazaar/Festival to celebrate the rice harvest. It was so successful; the idea was formed to make it a community celebration. Farmers from Winnie-Stowell, Liberty, Dayton, Anahuac, Orange and Hamshire-Fannett areas gathered to discuss this event. Early in 1969, the group chartered a bus and traveled to Crowley, Louisiana to talk to the International Rice Festival Board of Directors. They returned all enthused about having their own celebration. By October 1969, they had obtained the Charter for the Texas Rice Festival, Inc.  That was the beginning of a long relationship between several communities as they came together to celebrate the rice harvest so vital to the area.  The original idea was to rotate the event between several cities; Liberty, Anahuac, Dayton, Winnie. The first one to be held in Winnie.

Everything and everyone was on a volunteer basis. A Board of Directors was organized with George Bauer as the first Chairman of the Board.  Plans were in the making for the First Annual Texas Rice Festival to be held on Broadway Street in downtown Winnie. The minutes of the first meeting reflect that a motion was made and passed to hold the event in Winnie every year instead of rotating as originally planned. On October 3, 1970, Jack Cravy presided over the first Rice Festival.

Many changes have taken place throughout the years. The first office of the Texas Rice Festival, Inc. was in the old Post Office Building that housed the office of Gordon Lewis, CPA and the Chamber of Commerce office.  Mr. Lewis was President of the Chamber of Commerce and Mrs. Johnny Wright was Secretary to Mr. Lewis and Secretary of the Chamber of Commerce. In 1969, she was approached by the organizers of the Texas Rice Festival to also serve as its first Secretary. After the first festival, the office was moved to the old Board Room of Gulf Coast Bank.  There it remained until it moved to the County building across the street from Winnie Pharmacy (now Brookshire Bros.) In 1994, with the monetary contribution of Ferdinand and Edna Mae Leonards and the efforts of the Texas Rice Festival, the present day office on LeBlanc Street and the Leonards Agricultural Museum was built.

By 1974 the Board of Directors saw the need for more space to hold all the activities the Festival had to offer. In 1975 the Festival entered into a Usage Lease Agreement with Chambers County to use the Winnie-Stowell Park on LeBlanc Street to hold the Festival.

The Park opened avenues for additional activities. Gospel Singing Jubilee was added to the itinerary as was Miss La Petite Rice Fesivi-ti and plans for a new barn for the “Livestock Show”.

In 1972, it was resolved that the Presidents would serve two year terms, if they so chose. During that time, only one President served a one year term and that was John Foy. The two year terms were voted out in 1989 and resumed to one year terms.  Some of our Presidents have made history. There has been only one person to serve two non-consecutive terms; Pat Pryor was President in 1992 and again in 1999. Chad Andrus served as our youngest President in 2003 at age 28 and in 2005 Lilton Sonnier was our oldest presiding President at age 88. In 1998 the by-laws were amended to start the reigning year in November instead of January, leaving David Murrell the only President to serve a 10 month presidency. After 27 years of male dominance, in 1997 Phyllis Girouard was elected the first female president of the Texas Rice Festival. 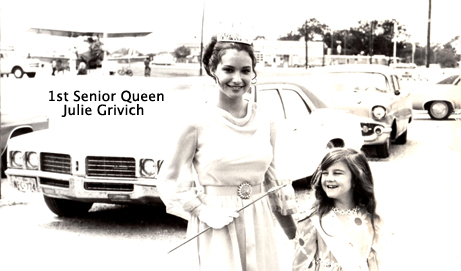 The Festival Queens have also made history.  In early 1994 the Board of Directors passed a resolution to change the coronation of the Senior Queen to the week prior to the Festival instead of the last day of the Festival. This gave the Queen’s reign over the year’s Festival in which she was crowned. Therefore, 1994 had two Queens. 1993 Queen, Deanna Abalos and 1994 Queen, Delina Patterson both reigned during the 1994 Festival. Then along came Ike! No Queen crowned in 2008, leaving 2007 Queen, Ashley Rhodes to reign 2 years. The Festival has had four Junior Queens to go on to be Senior Queens. They are Cheryl Blackmon, Laura Ferguson, Nancy Felix , Kelsi Wegner and Tayler Hatcher.

In 1974 a new contest was introduced. The Lady in Waiting Contest with Tammy Kirkpatrick named the first Lady in Waiting to the Senior Queen. In 1975, the contest for “Miss LaPetite Rice Festivi-Ti” was opened to 3-5 year old girls. The first to grab that title was Tammy Lynn Whitman.

In 1986, after suggestions from the community, it was decided not to slight the young boys. So, the Little Rice King was introduced for 3-5 year old boys.  The first Rice King was Lesley Garvey of Anahuac.

Parade Marshals are chosen by the President of the Festival. They have been Senators, Congressmen, Governors, Judges, Recording Artists, Commissioners, Sheriffs, and Civic Leaders both on local, county and state levels.

Honorees are chosen for their contributions to the Rice Industry. George Bauer, the “Father of the Texas Rice Festival” was the first to have the honor.

1976 was the year of hard work put forth by Bill Broussard and his ag-youth group. The livestock barn was built for the first “Livestock Show” held in the new barn. The sign that was installed at the new barn had 68 names of individuals and businesses that had contributed to the building; either by contributions of time and/or money.

In 1980, the Barbeque Cook-off was put into action on the weekend before the Festival. The Cook-off is celebrating its 30th year this year.

The Texas Rice Festival began as a one day affair in 1970 and now boasts seven days of activities.

Today we honor our past, celebrate the present and look forward to the future.